This is a guest post by Albert Ruesga, CEO of the Greater New Orleans Foundation. It is a shorter version of a post he wrote for his personal blog. You can read the full post here. 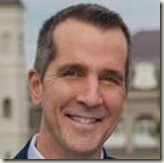 …with apologies to Martin Luther: