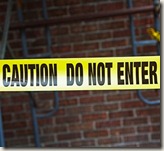 The word deviant is such a strong cultural label that many people interpret it to mean something similar to evil. Calling someone “deviant” calls up images of illicit or extreme criminal behavior.

But that’s not what deviance really means.

I think the status quo in philanthropy is pretty lame. The cultural norms which dictate what is acceptable behavior in the social sector are not set in stone. Like all cultural norms, they are not objective or even necessarily logical. They deserve to be challenged.

Challenging the status quo in philanthropy requires a flourishing of deviant philanthropy.

Do I think these would all be good ideas? Of course not! They are deviant ideas and like any upstanding member of society, these deviant ideas violate my understanding of cultural norms and make me uncomfortable.

But that’s the point.

It is difficult to say which deviant challenges to philanthropy’s status quo will one day become cultural norms themselves and which are rightfully rejected. But I think it is well worth our time to explore the potential of deviant ideas to positively impact the practices of our field.

If you think about the set of practices which are acceptable cultural norms as existing within a circle and deviant behavior existing outside that circle, the line separating the two might be referred to as the “Edge”. It is with this definition in mind that I named the new Tactical Philanthropy series Exploring the Edge. It is in this area, the barely acceptable, grey area of cultural norms that the battle to reframe our sector plays out.

What ideas do you think are currently “deviant” but should become an accepted part of philanthropy’s cultural norms? Submit your deviant idea to Exploring the Edge and let’s start challenging the status quo.

[A special thanks to my sociologist father for the dinner table conversations of my youth that inspired this post.]