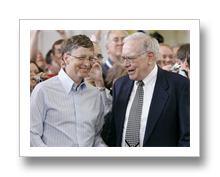 The Giving Pledge, the effort of Warren Buffett and Bill Gates to encourage billionaires to commit to giving away at least half their wealth, announced this morning that 17 more people have signed the Pledge. That brings the total to 57 of the roughly 400 US billionaires.

There were four items of particular interest in the announcement.

The Giving Pledge organizers featured a quote from Zuckerberg (the only new member of the Pledge quoted in the body of the release) in the second paragraph of their press release, clearly indicating the importance that the Pledge organizers see in having gotten him to sign on:

“People wait until late in their career to give back. But why wait when there is so much to be done?” said Mark Zuckerberg, co-founder, CEO and president of Facebook. “With a generation of younger folks  who have thrived on the success of their companies, there is a big opportunity for many of us to give  back earlier in our lifetime and see the impact of our philanthropic efforts.”

Steve & Jean Case’s Letter: While many of the Giving Pledge letters written by older billionaires express a desire to “give back” due to a feeling of gratitude for the opportunities they were given, the letter written by Steve & Jean Case reflect what I think is an emergent belief by many younger people that wealth creation is not a process of extracting value from society – which must morally be “given back” – but instead view wealth creation as an outcome of value creation and philanthropy as just another form of creating value in society. From their letter:

“From the early 1980s, we were both privileged to play a part in ushering in the Internet revolution.  AOL was, in essence, a social enterprise.  While we were focused on building a business, what really drove us was the mission of building a new medium that could empower individuals and become as ubiquitous as the television or telephone, but be even more valuable.  We are proud of the success AOL achieved – and in awe of the profound impact the Internet has had globally.

…While there is often a defined division between “for profit” and “not for profit” sectors – with for profit focused on making money and not for profit focused on making a difference – our experiences suggest that can be an overly simplistic way of looking at the world.  Instead, we first focus on a societal problem or opportunity that needs to be addressed, and then decide the right strategy to achieve the greatest gains.  Sometimes that is backing or starting a non-profit organization.  Other times, that is backing or starting a business that is focused on doing well while doing good.”

An International Giving Pledge: While Buffett and Gates have tried to tread carefully around the issue of the Pledge being expanded to include international billionaires (their trip to China was viewed by many in that country as an effort to “twist the arms” of Chinese billionaires and many in Europe find the idea of being public about giving to be in poor taste), the new release makes clear their global ambitions:

“Announced in June, the Giving Pledge now includes 57 families from across the United States. Additionally, both Buffett and the Gateses have begun conversations with billionaires from other countries to learn about their philanthropy efforts and what has worked in their countries.”

The Real Intent of the Giving Pledge: When the Pledge was first announced, I argued that while all the world’s billionaires signing on would be great, the real potential of the Pledge was that it might spur every day Americans to increase their involvement in philanthropy. I pointed to statistics that showed how a shift in giving behavior by every day Americans could have a 10 times larger impact on the amount of money given each year than a shift by billionaires.

In a press conference held after the initial announcement, Warren Buffett spoke about his hopes for the Pledge and said, “We want the general level of giving to step up…We want the Pledge to help society become even more generous. We hope the norm will change towards even greater and smarter philanthropy…” In the newest release, the Pledge organizers make clear the focus on this goal by quoting Peter Singer, a noted advocate for people from all walks of life to give a much higher percentage of their income to charity:

“The Giving Pledge is about changing the culture of giving. Research shows that when people know that others are giving, they are themselves more likely to give. So publicly pledging to give will encourage others to give. This holds true for billionaires and for those of  us who aren’t anywhere near that level of wealth.  We can all make a difference, and play our part in  making the world a better place.”

I think it is also telling that the Pledge made Zuckerberg’s participation such a notable part of their announcement. Given his age and his involvement with Facebook, Zuckerberg is clearly the Giving Pledge member whose philanthropic behavior is most likely to be influential with young people and people of more modest economic means.