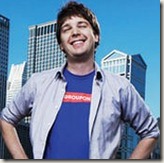 Groupon is the fastest growing company in history. Just two years after launching the company reportedly turned down a $6 billion acquisition offer from Google. But what many people don’t know is that Groupon was launched by a social entrepreneur.

Back in 2007, 26-year-old Andrew Mason was working away on a website called The Point. The concept was that people would pledge to take some sort of social action – give money, volunteer, join a campaign – but they would only follow through on the pledge if a certain number of other people made the same pledge. This allowed someone raising money via The Point to tell a potential donor that they could pledge $100, but would only have to make the gift if at least 100 people made the same pledge. In this way the donor would know that they would only have to give the money if the nonprofit was going to get $10,000 and fully fund the project.

The Point quickly joined Social Actions and during the FORGE event in late 2008, Andrew approached me about setting up a Tactical Philanthropy community project on The Point.

It turns out that just about the same time, Andrew was launching a little side project called Groupon that would apply the tipping point concept to buying discounted goods and services. That little side project exploded in popularity and the now 29-year-old Andrew is the CEO of a multibillion dollar company.

But Andrew’s social entrepreneur roots are still solidly in place. The Point is still operating and recently Sharon Schneider argued that Groupon might be the most successful social enterprise ever. Sharon’s argument rested on the fact that Groupon deals are not just for restaurants and spas, but also drive increased traffic to nonprofit museums, offer discounts on local sustainable food and other products and services are offered by nonprofits or result in some sort of social good. For instance Groupon has offered deals on Kiva.org microfinance credits (which Oprah pointed to as a “best holiday gift”) and offered what was effectively matching funds for donations via Donorschoose.

Now Groupon is focusing directly on social impact activity. Since Groupon has dramatically higher brand awareness than The Point, the two organizations have teamed up to launch G-Team on the Groupon website.

Here’s how Groupon explains the new platform (Andrew is known for his sense of humor, telling the NY Times during the rumored Google takeover that he couldn’t talk on the record with them unless they wanted to talk about his true passion… miniature dollhouses):

“Long, long ago (2008), Groupon was born out of a group action and fundraising platform called The Point. As the Groupon community grew, our collective consumer power helped people get great deals and discover fun ways to experience their cities.

After a desert vision quest where we invoked our ancestral spirits, we are repossessed with The Point’s powers. Newly inspired, we’ve devised a way to connect Groupon users with their communities in a different way—with G-Team. Groupon followers who want to do good, have fun, and make a real impact can now join forces through G-Team campaigns.

G-Team campaigns range from ridiculous flashmobs to fundraisers that benefit local community organizations. Every G-Team campaign connects you with enough people to achieve something awesome that you couldn’t have done alone.”

G-Team isn’t just replicating The Point, it is combining the offering of Groupon and The Point.

One of the examples explaining the service is a Groupon discount where buyers can get an $80 bike tune-up for just $35 (so long as enough people sign up). However, since this is a G-Team joint effort with The Point, the offer also includes the fact that if the discount tips, a local bike cooperative will fix up 100 broken bikes and donate them to disadvantaged youth.

In some ways, G-Team looks like a cleverly designed corporate philanthropy effort. One in which Groupon gets “good karma” credit for the social good offered by the companies that use their service. But unlike much of corporate philanthropy that is almost wholly disconnected from the for-profit activities of the company, G-Team seems perfectly aligned with the strengthens of Groupon.

I’ve written recently about Facebook founder Mark Zuckerberg’s philanthropy. But with Andrew Mason we have a true social entrepreneur who seemingly stumbled into an unbelievably profitable business venture. While Zuckerberg and other signers of the Giving Pledge should be rightly applauded for their efforts to give money generated in business to social impact organizations, the next frontier is business leaders who figure out how to embed social impact into the DNA of their profit engine.

With the launch of G-Team, which has the potential to deliver social impact as well as increase revenue for Groupon, we may be seeing the emergence of a multibillion dollar social enterprise.