Reader David Geihufe, who joined the debate around the Groupon as a social enterprise debate (part 1, part 2), points us to a recent TechCrunch post on the “pivots” of web companies. Joking that the word pivot has jumped the shark and should now only be used in mockery, TechCrunch illustrates the way web companies have pivoted during their growth process. 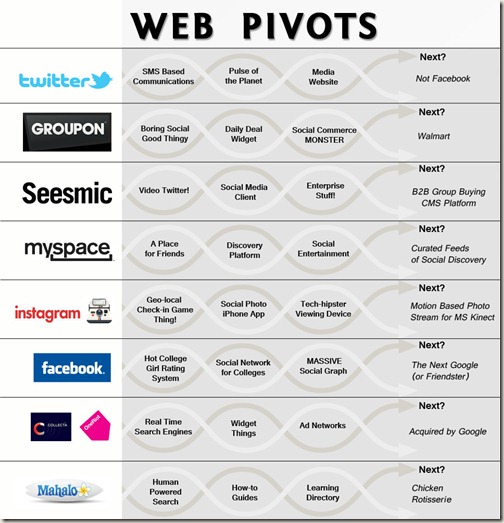 TechCrunch describes the first iteration of Groupon (refering to founder Andrew Mason’s The Point service for nonprofits) as a “Boring Social Good Thingy”. The company pivoted when Andrew launched the side project Groupon and then pivoted again when it moved from a simple “Daily Deal Widget” to what TechCrunch calls a “Social Commerce MONSTER”.

The illustration then suggests a possible next pivot for each company. For Facebook, the next pivot is labeled “The Next Google (or Friendster)” referring to the potential for Facebook to emerge as the most powerful web company in the world or fade away as early social network leader Friendster has done.

Who knows? As the first iteration of Facebook shows, how a web company starts off doesn’t necessarily dictate what it will become. But on the other hand, Groupon is alone among the listed companies (or any major web company to the best of my knowledge) that began life as a social enterprise.