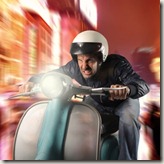 Philanthropy tends to value deep thoughts, strategic plans, fidelity to process and careful monitoring. But there’s an underappreciated attribute that too few funders deploy even though only self-imposed constraints limit its usage.

The world changes fast. Sometimes making the right decisions is all about thinking long and hard about your options. Other times the most important skill is learning how to make quick decisions.

According to Drowning in Paperwork, Distracted from Purpose by Project Streamline, the definitive report on the crippling bureaucracy that strangles much of institutional philanthropy, the average grant cycle – the period of time it takes to decide what grants to make – is seven months. Yet philanthropy has chosen to operate on this time lag. Organizations like Philanthropic Ventures Foundation and the Mulago Foundation demonstrate that philanthropy can be executed with far more speed.

To most people in philanthropy, operating quickly is equated with operating without adequate thought. Yet we know that Warren Buffett, the greatest investor of all time, has often made multi-million dollar investment decisions after a few days of due diligence.

“Last year, Buffett offered to buy an RV company one day after getting its proposal, and sealed the deal with a single 20-minute meeting. The RV company’s founder told the Wall Street Journal the process was easier than renewing his driver’s license.”

Considering the average foundation grant is for less than $25,000, it is certainly plausible that philanthropist might be able to speed up how they operate.

It isn’t just that moving slowly wastes time, it is quite possible that speed can help overcome other constraints faced by foundations.

Consider the Oregon Ducks who played in this year’s college football championship.

“Some people call it a no-huddle offense, but I call it a no-breathing offense,” Mark Asper, an Oregon offensive lineman, told me. “It’s still football. We hit people. But after a while, the guys on the other side of the line are so gassed that you don’t have to hit them very hard to make them fall over.”

Asper, who is 25 and served a two-year Mormon mission before starting college, is among several Oregon players who told me that opponents sometimes beg them to slow down. “A guy from Tennessee said to me, ‘If you keep running plays that fast, I’m going to throw up.’ I just said, ‘Sorry, but Coach will get mad at us if we slow down.’

Kelly’s overarching philosophy owes to business texts, most directly, the writings of Jim Collins (“Good to Great” and “Built to Last,” among others), who argues that successful organizations coalesce around a concise, easily communicated core mission. Kelly said: “If someone says to me, ‘What do you stand for?’ I should be able to invite them to practice and in five minutes, they’d say: ‘I see it. I get it.’ They stand for playing hard and playing fast.”

What Oregon’s innovative offense is really about is conditioning, repetitions in practice, precision and, most of all, agreement on the core mission — to go fast. Any team with a nimble, quick-thinking quarterback and an assortment of quick skill players could do it.”

For Oregon, speed under their new coach became a “great equalizer”. It allowed them to compensate for other deficiencies. It didn’t require any special gift or asset, it just required a decision to act with a relentless commitment to speed.

I’m struck by the fact that coach Kelly attributes his philosophy to Jim Collins’ books, which have also been a major inspiration in the social sector. Collins was a direct inspiration for one of the best selling social sector books of recent years, Forces for Good.

Is it a stretch to related football play calling to institutional philanthropy? Maybe. But just yesterday Google made a hugely surprising shakeup of their management team and said the reason behind the move was so they could make faster decisions.

Yes, making quick decisions can be reckless. But it is just as reckless to think you can slowly come to a supposed optimal solution while the problem you are facing increases with relentless speed.