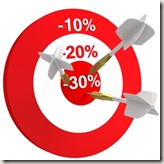 You can see this dynamic working if you think about whether you would rather be given $100 today or be given it in one year. The difference in the value of the present and the future is called the “discount rate”. In all likelihood you would probably prefer to get $100 in one year rather than $10 today. But there is some point at which you become indifferent. If you are indifferent between receiving $90 today or $100 in a year, then you are using a 10% discount rate (approximately).

However, for some time I’ve been wondering about how this fundamental tool for financial decision making works when it comes to philanthropic decision making.

Which would you rather have, a crime free society and clean environment today or in the future? Clearly, sooner is better. But what if it is either/or? Anyone with a child is going to tell you they’d rather their children live in that better world than that they receive the benefit of it. This preference for the future is hardwired into our species as becomes evident any time a parent puts their children’s needs ahead of their own. It is so hardwired into our neurological makeup that adult humans will often choose to put themselves in physical danger if needed to protect the physical health of any child, let alone their own.

If this is true, it means that social returns on investment are radically higher than we might otherwise suppose because, unlike financial investments, we actual prefer that social impact accrue to our children and their children.

But this concept can’t be entirely correct. Many forms of social good are not discrete events, but rather conditions within which life occurs. Wiping out polio, as Bill Gates is urging the world to join him in focusing on, is not a discrete event. If it is wiped out now, more lives will be saved and less suffering will occur than if it is wiped out later.

This means that maximizing the value of philanthropy rests on three elements 1) we should seek to create long lasting positive conditions rather than just discrete, socially good events (which is one way to express a preference for correcting the root cause of a problem rather than treating the symptoms), because doing so will create social value that accrues to more people, 2) we should seek to achieve those conditions as quickly as possible because doing so will allow the benefits to accrue to the maximum number of people but, 3) when forced to make a trade off between activities that create benefits in the future vs. benefits today, we should prioritize the future given the hardwired negative discount rates that we use to value the future vs. the present when it comes to social impact.

There are probably a number of ways to reconcile these three elements. There certainly are some creative tensions between them and so different people may choose different approaches. But for me, they suggest that as a general rule, philanthropy should focus on creating impact that:

In other words, donors and foundations should: Act quickly to create lasting solutions that prioritize the needs of the future.

To my way of thinking, the best way to get that done is for donors to make rapid grantmaking decisions in support of nonprofit organizations that seek to tackle the underlying causes of social problems, using grants which build the long term sustainability of their grantees while recognizing that truly effective interventions take time to achieve success.