A few weeks ago, I laid out a framework for thinking about the various roles that donors can play; philanthropic investors, charitable buyers and strategic philanthropists. The framework was meant to focus on the functional roles available to donors and to help link these roles to donor behaviors.

But what about the role of philanthropy as a whole within society? A philanthropic investor might fund organizations that seek to create value using market driven solutions while another may fund organizations that view the market as the cause of social problems and seek to correct for its excesses. Is there a framework we can develop that helps us understand this difference and shed light on the various ways that donors view the role of philanthropy? This framework would need to holistically describe the values behind giving, without regard to issue area.

During the debates about Philanthrocapitalism between Matthew Bishop and Michael Edwards, I observed that the two men had fundamentally different world views which rendered their debate impossible to resolve. Edwards seems to view the market and capitalism as the root cause of social problems while Bishop views the market and capitalism as the force most responsible for increasing standards of living. It is therefore not surprising that Edwards sees adapting the tools of the market to philanthropy (what Bishop calls Philanthrocapitalism) as a terribly idea while Bishop sees the trend as fantastic news.

In the political sphere, the terms Right and Left are used in an attempt to describe what is believed to be two prevailing views of the role of government in society. But this shorthand framework fails to capture the differences between libertarians who believe in lower taxes as well as limited regulation of social behavior and conservatives who believe in lower taxes but an expansive role for government in regulating social behavior. It similarly fails to differentiate on the Left between Joseph Stalin and Mahatma Gandhi. In an attempt to build a better model of the beliefs around the role of government, The Political Compass has been created.

The Political Compass creates a two-axis grid that allows a given political view to be charted on a spectrum of economic and social thought rather than a simple Left-Right. 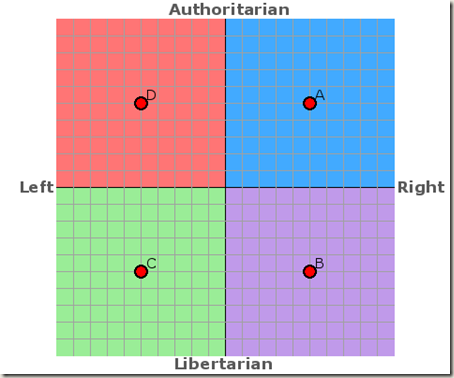 Might we create a similar compass for philanthropy that describes the various beliefs that donors have about the role of philanthropy in society?

I first considered this idea during a conversation with Peter Frumkin during which I posited that the appropriate axes might be Optimization-Transformation and Creation-Distribution. My thought was that philanthropy can be seen as a tool to make the current social system work as well as possible (Optimization) or as a tool to create a new social system (Transformation). A separate, uncorrelated axis would look at philanthropy’s working relationship with the market economy. A donor might believe that role is to enhance the market by creating social value (Creation) or they might believe the role is to correct for the excesses of the market by focusing on how social value is distributed (Distribution).

This loose framework led to the Tactical Philanthropy Forum debate titled Unconstrained Philanthropy in which we discussed whether donors and funders should see their role as one of correcting and optimizing existing social systems or if they have an opportunity to remake the social fabric.

However, I was never convinced that these axes holistically captured the full range of various viewpoints.

In recent days I’ve been discussing this topic with reader Matt Lee, formerly of Bridgespan and now a doctoral candidate at Harvard Business School. We’ve gone back and forth a bit on the general framework and agreed that the Political Compass works because rather than focusing on specific issue areas, it maps out beliefs about the overall role of government in the economy and society. We think the same should be true of a Philanthropy Compass.

The Political Compass allows users to answer a series of questions about their beliefs and then locates them on the compass. Public statements by politicians have been used to answer the questionnaire and thereby locate public personalities on the compass as well. A strong Philanthropy Compass framework should allow for a similar process and Matt has expressed interest in working with colleagues at Harvard to build a functional Philanthropy Compass tool if we can figure out the best axes to use.

So now I open the floor to you. What axis can be combined to best capture the huge, multifaceted set of values that drive philanthropic behavior? The only requirement is that the two axes describe a set of beliefs about the role of philanthropy and that when combined a large majority of donor behavior can be logical explained by the donor’s position on the Compass.