What Should the Giving Pledge Do Next? 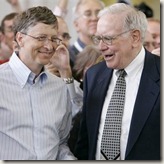 A few weeks ago, the members of the Giving Pledge met in person for the first time. The event was very hush, hush (except for AOL founder Steve Case’s tweeting), but I’ve had an opportunity to speak with someone who was there. Partly the event was about giving the billionaires who have pledged to give away at least 50% of their wealth a chance to get to know each other. But one of the themes was an ongoing discussion of what the Giving Pledge should be all about.

In my own writing on the Giving Pledge, I’ve stressed the idea that the big opportunity is for the Pledge to affect the way everyday Americans think about giving. I’ve run an analysis that suggests that the Pledge, at best, might result in a 10% increase in total charitable giving if viewed in isolation. But if the Pledge encourages donors in general to give more, it could increase giving by 100%. Warren Buffett, the primary driver of the Pledge, seems to be thinking this way too and has said “We want the Pledge to help society become even more generous. We hope the norm will change towards even greater and smarter philanthropy…”

My understanding is that the opportunity for the Pledge to affect overall giving was an important topic of discussion at the gathering and that the group is still wrestling with what they might do to change the norm to “greater and smarter philanthropy”.

Here are a few ideas I have. I’d love to see more ideas added in the comments:

What else might the Giving Pledge consider as they try to increase and enhance America’s cultural relationship with philanthropy?