I’ve written a number of times about the tension between logic and empathy. I think it is critical that the effective philanthropy movement recognize that while data is an important input to good decision making, it can also dampen the very emotions that drive giving. That’s why I think it is critical that high performing organizations learn how to tell authentic stories about their impact. Stories that are based on solid data about what works, but which respect the role of emotion in the field of philanthropy.

Kiva is an organization that I’ve held up in the past as really understanding how to tell an authentic story that “sticks” (in the vocabulary of the must-read book Made to Stick: Why Some Ideas Survive and Others Die). The point of Made to Stick is that a good story is true, but it must also be told in such a way that it spreads. Too often I worry that the effective philanthropy movement is convinced that if they can just find the “truth” about what works, the rest will take care of itself. But I don’t think that’s enough. We need to discover the “truth” about what works and learn how to tell the story of that “truth” in a way that spreads.

Here is a new video by Kiva. The video presents data about the increasing level of microfinance loans made by the organization over time. But this ain’t no Excel graph…

This data is just as “true” as a simple chart like this one (which actual does represent Kiva’s loan growth from early 2006 through late 2007): 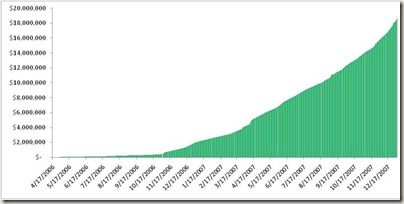 In the book Made to Stick, the authors talk about how a group of food scientists spent a long time telling people about how much fat was in movie popcorn. But it wasn’t until they figured out how to tell the story of how bad movie popcorn was for you through laying out a table top covered with bacon, eggs and cake to demonstrate how much fat was in the product that people started paying attention.

What we need is storytelling for impact that drives people to take action in service of programs that work.