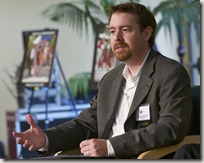 During the time he was writing Tactical Philanthropy, Sean was a regular speaker to major donors, foundations, nonprofits, college students and other groups interested in philanthropy. He consistently received top marks from audiences for his engaging presentations full of images and video clips. Sean is not currently accepting speaking engagements.

November 17, 2011
Minneapolis, MN
Sean spoke at a private event with the board as well as a public event for donors and financial advisors about the way the motivations driving charitable giving are changing and what this means for the future of philanthropy.

October 5, 2011
GuideStar Webinar
Sean spoke to an audience of nonprofits, consultants, financial advisors and foundation professionals about the Second Great Wave of Philanthropy and how major donors are shifting their perspectives on what kinds of nonprofits they want to support.

May 6, 2011
Tampa Bay, FL
Nonprofit Leadership Center of Tampa Bay Conference
Sean gave a keynote address focusing on key trends in philanthropy and the emergent interest major donors have in “investing in nonprofits”.

March 28, 2011
Philadelphia, PA
Jewish Funders Network
Sean gave a keynote address on the tension between logic and empathy — head and heart — in philanthropy, as well as spoke on a panel discussion about nonprofit evaluation and organizational analysis.

February 8, 2011
Miami, FL
The Gathering of Leaders
Sean spoke at New Profit’s annual conference on a panel about how and to what degree nonprofit evaluation can help us direct more resources to programs and organizations that get results.

January 15, 2011
Toronto, Canada
Engineers Without Borders Conference
Sean gave a speech on the topic of nonprofit results reporting and how donors should think about building capacity.

December 7, 2010
London, England
UK Conference on Philanthropy
Sean gave a keynote address to Britain’s largest nonprofit sector conference about key trends in philanthropy, the state of major donors and the key characteristics that tactical philanthropists look for in the nonprofits they support.

November 4, 2010
Indianapolis, IN
Indiana Grantmakers Alliance Conference
Sean gave the opening keynote address on the role of information filtering in philanthropy as well as led a breakout session on social media and philanthropy.

October 21-23, 2010
Long Beach, CA
Social Venture Partners Conference
Sean gave a keynote speech on the role of influence in philanthropy and led a brainstorming session on how SVP can best use its influence to increase philanthropic impact.

October 14, 2010
San Diego, CA
San Diego Grantmakers Conference
Sean led the opening plenary on the future of philanthropy and spoke on a panel about information sharing.

October 4-6, 2010
San Francisco, CA
Social Capital Markets Conference
Sean designed the Tactical Philanthropy track at the conference and spoke at numerous sessions as well as at the opening plenary.

May 12, 2010
Webinar
GuideStar, Effective Nonprofits and Major Donors
Sean joined Bob Ottenhoff, the CEO of GuideStar for a conversation about what major donors are looking for when they make proactive philanthropic investments. Listen here.

April 27, 2010
Denver, CO
Council on Foundations Annual Conference, The Role and Effect of Technology on Social Innovation
Sean spoke on this panel about how technology has dramatically changed how ideas and values are developed and exchanged, how successes, failures and impacts are communicated and have shifted roles in philanthropic decision-making.

April 12-14, 2010
Pittsburgh, PA
Grantmakers for Effective Organizations Conference
Sean debated the role of foundations in providing capital to high performing nonprofits vs. their role in crafting their own programs with Paul Brest of the William & Flora Hewlett Foundation.

April 1, 2010
Portland, OR
Campus Compact, Continuums of Service Conference
Sean was a keynote speaker at this conference for university faculty and students interested in service learning.

February 4, 2010
Webinar
NTEN, The Overhead Question: The Future of Nonprofit Assessment and Reporting
Sean joined Bob Ottenhoff, the CEO of Guidestar, Ken Berger, the CEO of Charity Navigator and other social sector leaders as they discussed the future of nonprofit analysis. Recording available here.

January 27-28, 2010
Los Angeles, CA
University of Southern California, Philanthropic Leadership in a Challenging Landscape
Sean joined the morning plenary discussing the topic “Where is philanthropy heading? Where should it be? What should we be doing?”

December 15, 2009
Webinar
Advisors in Philanthropy Education
Sean discussed the business of philanthropy advising in this talk show style conversation with Phil Cubeta, the director of the American College’s Chartered Advisor in Philanthropy program.

November 6, 2009
NYU Conference of Social Entrepreneurs
Sean discussed philanthropic capital as part of a panel looking at the spectrum of capital from philanthropic to full market rate.

July 2009
Hudson Institute, Washington, DC
Sean joined Steve Gunderson, CEO of the Council on Foundations, Ian Wilhelm, Chronicle of Philanthropy, and Tom Fontana, creator of the NBC drama The Philanthropist to debate the importance of the show to philanthropy. Video of the debate here.

May 2009
Council on Foundations Conference
Sean was a panelist along with Michael Smith of The Case Foundation and Kristen Taylor of the John S. & James L. Knight Foundation at the Taking Philanthropy Online session.

April 2009
Center for Effective Philanthropy Conference
Sean spoke at a session titled Foundations and Information: When to Share What You Know. Blog post about session here.

March 2009
Notre Dame de Namur University: Youth Philanthropy Day
Sean was a featured speaker on the implications of the growth of social media on the philanthropic sector.

February 2009
Stanford University: Philanthropy is For Everyone
Sean lectured on Stanford Alumni Day in this one day course on philanthropy.

February 2009
Philanthropy Media Briefing
Sean, Stacy Palmer, editor of The Chronicle of Philanthropy, and Matthew Bishop, editor of The Economist magazine US edition and author of the book Philanthrocapitalism, addressed the New York business press on the topic of how to cover philanthropy. Blog post about event here.

January 2009
Northern California Planned Giving Council
Sean was the luncheon speaker on the topic of The Convergence of Wealth Management and Philanthropy.

December 2008
Yale School of Business Philanthropy Conference
Sean spoke with panelists from the Ford Foundation, Wallace Foundation and the director of Philanthropic Services at Bank of America.